The Edge of Chaos. City of the Dead. The Ring of Winter. Erik Scott De Bie. Death of the Dragon. The Fall of Highwatch. Cry of the Ghost Wolf. The Sword Never Sleeps. Daughter of the Drow. Hand of the Hunter. The Giant Among Us. Rise of the King. Mistress of the Night. The Titan of Twilight. Queen of the Depths. Curse of the Shadowmage. Beyond the High Road. The Shield of Weeping Ghosts. The Jewel of Turmish. Tom Clancy's Net Force: The Lost Library of Cormanthyr. Tales of the Slayer. Lord of the Libraries.

The Quest for the Trilogy. The Destruction of the Books. Run Hard, Die Fast. How to write a great review.


Want to Read saving…. Want to Read Currently Reading Read. Refresh and try again. Open Preview See a Problem? Thanks for telling us about the problem. Return to Book Page. Wrath of the Blue Lady Forgotten Realms: The Wilds, 4 3. A treasure hunter discovers a sunken ship beneath the Sea of Fallen Stars. Magically distorted landscapes, jungle islands teeming with reptilian monsters, wide frontiers touched by another plane, or deep under the surface of the sea—adventure is waiting.


Lists with This Book. May 17, Travis rated it liked it Shelves: The story follows a father and son looking to recover long-lost books containing knowledge that, if in the wrong hands, could wreak havoc. The son, a half-elf monk by the name Shang-Li, and the father, whose name is Kwan Yung, are attempting to find a book that was lost at sea that could tell them where the long-lost books could be. We also learn, that a fey creature referred to the Blue Lady has these books but is unable to translate them. In order to translate them, she seeks out others with the knowledge and ability to do so, at the price of destroying ships.

She wants to knowledge of these books so that she can return to her homeland and exact revenge on those who imprisoned her under the Sea of Fallen Stars. She discovers that Shang-Li may have the knowledge and skill to translate these books and slowly lures him into her territory. In order to get the books back and into safe hands, Shang-Li and his father, set out to recover the books. There are times in which having a cliffhanger is wonderful. These times usually are generally separated by another scene or are pick up after a few pages, causing them to build up excitement.

Then there is the chapter endings in Wrath of the Blue Lady. It seems that most of the chapter's end in a boring cliffhanger that is directly resumed on the next page. No suspense, no excitement is gain and it gets old fast. I don't know how many times I had to suffer with reading that Shang-Li sees a blade, only to read on the next page that he shifted to his left. It doesn't build up anything and it kind of halts the pacing and flowing nature of the story. Many scenes don't really fit together. Most of the action scenes for examples seem rigid and confusing.

Then there is the pointless dialogue inserted here and there, and it causes some scenes to drag on longer than they should have. When you read a scene, you kind of expect it to flow without any random jumps or interruptions. Here however, there is either a time jump or an odd interruption. For example, late in the story, Shang-Li is getting treated for an injury and his father is talking to him.

It's a nice conversation when, BAM! Yes the conversation seemed finished but it just was a sudden jump in time. There just were to many things that hampered the flow. The focus is on the crew of the ship repairing it, waiting to see what the Blue Lady does. This goes on for the better part of five or more chapters. What makes everything worse is the Blue Lady lets them fix up their ship. She even visits Shang-Li and continually threaten him about how if he doesn't help, his friends and father will die. It just drags on so long with almost no action or suspense. Then later you get the weak excuse that the Blue Lady was waiting for a full moon.

It felt slow, and it was boring.

At first, their dialogue between them didn't really flow to well and felt rigid and forced. As the story progresses, you start to see how their relationship is and you begin to understand certain things about them, which explains the awkward dialogue between them. Their interactions between one another are really well written. Most of these characters aren't introduced until the middle of the story, which is a shame. You have the friends of Shang-Li and the ship's mage are the interesting. Shang-Li's friends, Thava and Iados, are two very intriguing characters that really worked well off one another when we first meet them.

Thava is a dragonborn paladin whose sense of charity really annoys Iados, a tiefling, because of his love of money. Then we meet the ship's mage, Amree, who becomes a 'love interest' to Shang-Li. While she starts to kind of fizzle out towards the end, the scenes featuring her are interesting. While it's a shame that the minor characters get relatively little 'scene time', they did make a great impression on my mind. The concept itself was interesting. Having a goddess-like being trapped under the sea, having to resort to using 'manlings' to help her live her imprisonment, and the undersea world were pretty different.

It was just interesting to see this powerful being forced to wait with her only escape with her, but unable to use it. Then the distorted undersea landscape, with everything a danger, was different, in a good way. She's called the Blue Lady throughout the story but every once and a while her name appears. At first, when I saw this it really confused me, thinking that there is another character that we have yet to meet.

Wrath of the Blue Lady by Mel Odom

But that wasn't the case. I just didn't understand why should we know her name? Early on, Shang-Li gets a stain that someway connects him to the Blue Lady. However, right after that, we never really hear of it again. I don't really care for the art. It's a little bland and generic, like most of The Wilds art work was like. But a giant squid wrapping around a woman seems like something you'd see on a 50's b-movie poster.

The big issues are the problems with the flow and pacing and the dumb cliffhanger chapter endings. It slows the story down and quite honestly, I did get bored with it many times. Things dragged on longer than they should have and that didn't help anything. However, the father-son relationship I really enjoyed, along with Shang-Li's friends, and the concept was interesting. Dec 07, Robert rated it really liked it. TWotBL begins 14 years after the Spellplague to set up the storyline in the first chapter and then jumps to where the majority of the newer realms novels are set in DR in the second chapter throughout the rest of the book.

The main plot is straight forward and follows a father, Kwan Yung, and his son, Shang-Li in their search for ancient books written by Liou Chang who discovered a way to use a series of portals to win his campaign. Being Shou monks, Kwan and Shang-Li only want the books so they can keep them safe in the monastery, but the Blue Lady has other plans for them. There are some subplots with Shang-Li's past, part of it his father wont' let him forget, the mystery of where the Blue Lady came from, and a love interest.

The story flows along at a nice pace that keeps the pages turning. Even with most of the story centered around the Sea of Falling Stars, the novel moved at a good pace and held my interest very well. There is not a whole lot of character development, but what there is works great with the story.

The Blue Lady of Thompson wesatimunogo.cf

I have noticed this with most of the books in The Wilds series and usually I don't say anything and didn't until I read Jak Koke's Edge of Chaos, which is also a very good book, but the amount of mistakes I found was horrible. It absolutely frustrated me because there were so many. So much so that I kept count and there was 21 of them in a page book.

I don't know whit is going on with WotC, but if this continues, they may want to look into it. There were some times when I just couldn't get the visuals clear. Most of the book was fine, until they go underwater. The environment depictions didn't stick and so I really couldn't envision the forest, yes, I said forest, as clearly as I would have liked. Being a post Spellplague book, I didn't have the feeling that it was such and it felt like any other realms novel.

Sure, there are some elements and discussions, but the reader is not overburdened with spellscarred people. In this one, the land was more affected than anything. Odom really knows how to keep the action flowing and set his characters up for on heck of an adventure. If something can go wrong, it probably will.

The banter between father and son is quite funny. Odom keeps a great dialogue with his characters as well as a run along jab that continues throughout the novel. Each character has their own voice and was easily distinguishable. Overall, I really enjoyed this one.

Wrath of the Blue Lady

If it wasn't for the mistakes, I would have put this one as my favorite in the series. I do feel that this one and Edge of Chaos were about even and both are great reads. 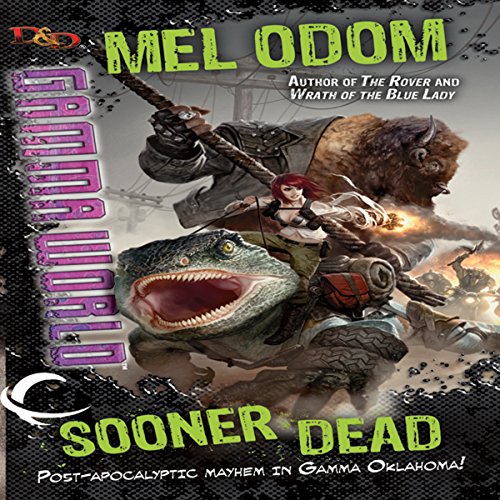 If you want to check out the FR and can get past the grammatical errors, this is a good one. I don't think you will be disappointed at all. If you would like to try the fantasy genre for the first time, this one would not be a bad place to start either. I almost feel as if Mr. Odom was rushed a bit to put a story together and get it printed.